What the local people went through is unimaginable. Many were traumatized. Many people lived in fear, especially the children. Every time the wind would pick up or if it started to rain, they would re-live the fury of the storm. For them, it was as if it is going to happen all over again.

In December 2013 Sebaastian van der Schrier felt drawn to take the benefits of tapping to kids in the Philippines. He tapped with 200 kids and helped them over their trauma, then decided he wanted to do more.

In April 2014 Dr. David Lake and Steve Wells joined with other tapping practitioners from around the world who closed their practices and moved other commitments around so they could be there to help out directly.

They wanted to help the people who were traumatized by Yolanda, especially the children, to move on emotionally,  restoring their sense of safety, helping them heal the pain and sadness in their hearts so they can focus on creating a positive future.

Here’s the first video from on the ground showing the trauma relief work.

Watching it through afterwards brought a tear to my eye as I recalled the many poignant and joyful memories of our time with the beautiful Filipino people. We worked in the villages (barangays) around Tacloban which were worst hit by the typhoon, with people who lost family members and friends, and children who were fearful of the storm returning. We also trained many village leaders to use the tapping to help others.

It’s such a joy to see the transformation first hand as life and energy and confidence return to people who moments before were filled with sadness, grief, and fear. The children especially embraced the tapping, as you’ll see. Steve Wells

In this video, Steve Wells is interviewed by Maria Annell with translator Carine Barco for the French Tapping Summit. He provides a summary of the humanitarian expedition with photos.

From these beginnings this has developed into a long-term empowerment project to develop resilience and improve quality of life for Filipinos through teaching them tapping and other techniques for tension and trauma relief and for developing well-being.

See this inspiring video testimonial from one of the survivors which shows just what tapping can do:

Please support out continued efforts to take the benefits of tapping to more people and stay up to date with developments by visiting Empowering the Philippines. 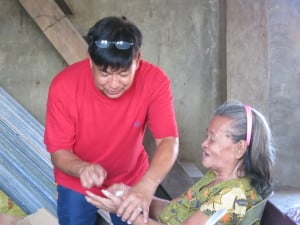 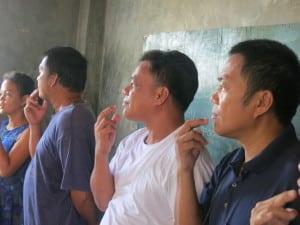