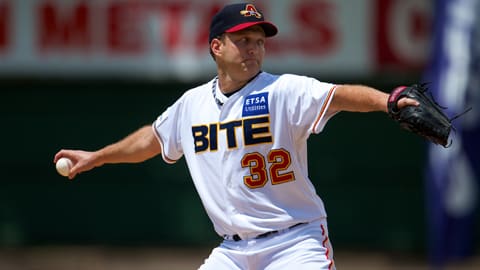 {Note from Gary Craig: If you are familiar with baseball statistics you will find the following “before and after EFT” statistics below very impressive. Pay particular attention to the “Earned run average.” This is the main yardstick by which pitchers are measured. The lower the better. Rarely do you find any pitcher, anywhere, get as low as 0.87.}

As anyone who has competed in athletics can say, the difference between the average athlete and the elite player is much more mental than physical. In an effort to bring my mental preparation for baseball to the same level as my physical preparation, I was introduced to EFT (Emotional Freedom Techniques) by Steve Wells, a psychologist based in Perth, Australia. Before working with Steve, I was able to perform well in training and some of the time in games, but I wanted to access my best performances more often and in the most pressure filled situations.

Steve and I worked together using EFT to lessen or eliminate the mental and emotional barriers preventing my consistently producing my best games as a pitcher. The results were astounding. I had more consistency, better command of my pitches, and accomplished it in big games with less mental effort. There is clear evidence in the numbers when you compare my Australian Baseball League season statistics before EFT and after EFT:

I am so amazed with the effectiveness of EFT that I’ve made it as important a part of my baseball routine as throwing or running or lifting weights. The title “Emotional Freedom Techniques” certainly does fit.

By Catherine Cox
{Note from Steve Wells: The Australian Netball Team are world champions, a position they have held for 15 years. In her email, Catherine describes how she used EFT to move from a point last year when she was in an absolute performance slump and she was dropped from the Australian team through to her eventual reinstatement and gold-medal winning performance at the Commonwealth Games in a double-overtime (read “intense pressure”) thriller against New Zealand.}

“Being an athlete and spending your whole life trying to be the best you can be in a sport you love is gratifying. My name is Catherine Cox and I am a Sydney TAB Swift and Australian Netball Representative. As you may or may not know netball is not a professional sport so to be able to commit so much time and dedication into something you really have to love what you’re doing! And I do……… Now!!

Netball had always been something I loved. I loved the feeling of being out there on the court enjoying my skills and the skills of the team around me! It was always something I was extremely confident about until I made the move to a new team that needed a bookend, a focal point! A team that was relying on me to pull them through the dark times and create some wins. Being on court in front of this new crowd and new team I felt an unbelievable amount of pressure! I HAD to be a superstar or these new people will wonder why I’m here! I HAVE to get some wins on the board for my new team to show I AM having an impact here!

It was the start of the 2nd year that this pressure and building up lack of confidence came to a real problem point and as a shooter it was obvious. I had always been a player that went out there and just played and all of a sudden I was made to think about every move I made and every thought I was having. I started to over examine myself constantly and lose confidence even more drastically. Thoughts like ‘I have to get this shot in or people will think I’m not good enough’ or ‘I don’t want the ball because I don’t want to have to shoot it. I could miss’. My shooting percentages dropped significantly but what’s worse is that I no longer wanted to be on the court playing the game I loved. All confidence was lost!

The final turning point after weeks of telling myself the feeling would go away came in an International Test match against New Zealand. I had been given the opportunity to start the game which showed a lot of belief in me by my coaching staff. The feeling I had however was sickness. I couldn’t think of anything worse than being out in front of a crowd watching the 2 best netball teams in the world going head to head. What if they think I’m not good enough and that I shouldn’t be there? I returned home prepared to do whatever it took to sort myself out or I was going to have to give up the sport I used to love so much.

I had never, ever been a fan of sports psychologists and when someone mentioned this new technique called “Emotional Freedom Technique” that a man named Steve Wells specialised in I was more than sceptical to say the least! My first meeting with Steve I was truly at the bottom of the barrel in terms of confidence and couldn’t believe that my fear of never playing and enjoying the game again would ever go away! It was weighing me down so much it couldn’t possibly just go away!

To be honest my first experience with EFT was horrible because it was all about confronting my fears head on and saying them out loud! Something I had yet to do! It was bad enough thinking about them! I remember crying so much and struggling to breath thinking to myself this Steve man is in way over his head! Surely he’s not had to deal with something this bad before.

When Catherine arrived for that first session she was in a very upset state and her issues were really close to the surface. Since she knew about EFT and was highly motivated we started using the technique almost immediately on the things she was thinking and feeling. Whilst it isn’t necessary to always “confront fears head on”, I’ve found that when someone is “in” an intense state, the best remedy is lots and lots of tapping right then. We did a large number of rounds that session, including some tapping whilst talking and processing the information. My colleague Dr David Lake has taught me that for intense “stuck” states like this, tapping is the antidote – the more tapping the better – so now instead of talking a lot “about” things, I try to spend as much time as possible getting rounds of tapping done.
Catherine Continues:

I got through the first session, just, but the test would not come until I was in the situation I had struggled with all year. On the court. After the session I was still extremely sceptical because I really didn’t feel any differently. It was when I hit the court again that I noticed a difference in the way I felt when out there. I was almost looking forward to playing the game, which was a feeling that had been evading me lately. It wasn’t a miracle cure by any means but with so many issues to cover my change wasn’t going to happen over night.
I found myself at home practising the technique (certainly not something I would do if I didn’t think that maybe this was working). Around that time came my dropping from the Australian Team and the time I knew I had to really take hold of this and fix the problem, next year was a Commonwealth Games year and I was going to be there.

Catherine’s shooting percentage improved from 55% the game before we had our first EFT session (a performance that totally disheartened her and explains her really low state when she arrived at my office), to a brilliant 80% in the game she played after doing EFT. Her percentages remained in the high 70’s or better for the remainder of the season and the local newspaper described her as returning to “the top of her form”. Despite this, the feedback I received through her coach was that Catherine “thought it might have helped but wasn’t convinced”. She didn’t return to see me at that time. This is a frustrating thing for a practitioner, especially since I had seen considerable shifts in her emotional levels in the session AND her performance on court had undergone such a dramatic shift. However, I have learnt from past experience to wait and see in these situations and that’s what I did.
Early this year, Catherine contacted me again. She reported that the feeling was still there but was definitely lower in intensity and occurring less frequently than before. She wanted to overcome it completely and reach her goal of being in the Commonwealth Games Team.

We worked for several sessions on her feeling of being “in the spotlight” and “having to perform”, and the feeling progressively improved. My basic approach was to get her to focus on the actual game situations that provoked the feeling and apply EFT to those. At one point we also uncovered a childhood experience where she had to perform in a school play and treated that successfully using Gary Craig’s “Run the Movie” technique. We also focused on her ultimate goals of being an established Australian team player and world champion, a goal which in itself brought up a lot of pressure to perform. I reframed pressure situations as opportunities both to tease out all aspects of the problem, and also because the ability to handle more and more pressure is central to the achievement of such a high goal. We were fortunate that many situations arose during the season during which the games provided a great deal of pressure on her to perform. She handled them admirably using EFT.

A few more sessions with Steve and my arranged return to the Sydney TAB Swifts for the next season things were looking brighter. I made the Commonwealth Games Team and was having an extremely happy and productive season with my team. Shooting percentages are back to where they should be and I look forward to the games ahead each week and being on the court again!
In August at the Commonwealth Games I made the gold medal match, a classic Australia vs. New Zealand game and although I didn’t get to start I was given the call to go on at half time. After having to endure watching the first half I was feeling pretty sick as it was shaping up to be a typical 1 goal the difference game.

Knowing that I had to go on and make some sort of an impact I took myself out the back and did a little EFT behind the bleachers whilst waiting for the half time whistle. Lucky I did because it ended up going to double extra over time and although I didn’t shoot great statistics that game I certainly made some goals that really counted helping Australia to a 2 goal win and a gold medal. More importantly at no stage when I missed a shot did I let it bother me! “So what I missed a shot, I’ll just get the next one in”!!! An absolute revelation and all thanks to EFT!

Catherine Cox
Steve Wells comments: The gold medal game was an absolute thriller and Catherine hit some clutch shots from long range in the final few seconds to help Australia to make it over the line. She is a true world champion, who is achieving her dream with the support of EFT.