This article was originally published in EFT Creator Gary Craig’s Newsletter following the September 11, 2001 terrorist attacks. Gary Craig has since evolved Gold Standard EFT with additional guidelines for treating trauma. Also, the tapping approach we use has since evolved into our much more user-friendly SET – Simple Energy Techniques. Find more on SET here 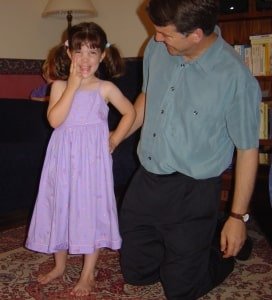 “Daddy it’s falling down! My house is falling down!” My daughter began screaming these words on the morning of her 3rd birthday. Just a moment before, she’d been playing excitedly with her toys, and then she suddenly started screaming. I rushed over and embraced her. In a split second I made the connection with the World Trade Centre disaster (I had thought we had managed to shield her from those disturbing images, but obviously sometime during the initial few days of 24-hour all-channel coverage she had managed to see enough to make a connection) and I asked her “Did you think our house might fall down like those buildings did?” “Yes”, she cried. As I held her I began to tap lightly on the face points for her. Within seconds, she was feeling better and began to smile. Soon she was ready to play with her toys again. I thought that would be the end of the matter…

About a week after this event, my 7-year old son, who had a virus and was running a temperature, cried out in the night, “Dad, I need some tapping!” As I walked into his room I couldn’t help smiling. Here was a boy that for the first 2 years of my use of EFT would frequently mutter “That won’t work!” whenever I suggested tapping. Those who have followed our progress over those years know that typically when I persisted with doing the tapping for him anyway it invariably worked. Now he knows the power of the technique. He doesn’t seem to have as much anxiety as he used to and so calls me infrequently these days. And he is learning to do the tapping for himself but he still needs assistance with some “hairy” issues. This one turned out to be quite a hairy one.

When I asked him what was wrong he told me that someone had put boulders on him and he was being crushed by them. He said lying in his bed was like lying on steel and being crushed by these boulders. My mind again moved to the Trade Centre disaster and for a second I wondered where these thoughts might have come from. However I quickly refocused on his experiences and rubbed on his sore spot, saying, “Even though these boulders are crushing you, you’re still a good kid and I love you”. I have learnt that it is really important not to deny someone’s experiences whilst doing EFT and I no longer feel the need to even reframe these into statements such as “Even though it feels like…” Or “Even though you believe…” I have had far better results treating the strongest form of the problem as voiced by the person – or in the case of “dreams” like this, by their subconscious mind.

As I put my hand on my son’s chest I felt his little heart beating like mad. I proceeded to tap on the points, whilst having him repeat the words “These boulders”. Three rounds of tapping later and his heartbeat felt more normal and he was much more relaxed. He said he was feeling much better and I reminded him that he could continue tapping for himself. We practiced for a moment with him tapping on the points and saying the words. Throughout the process he was smiling the whole time. Then he lay back down and went off to sleep.

The next night, the virus that had been in his system had been transferred to my daughter (one of the joys of parenting), who also had a temperature. Sometime during the night we brought her into our bed as she was burning up with fever. At some point during this time, she again started screaming, “Daddy, it’s falling down, my house is falling down!” whilst pointing at the walls.

It was only the morning after this event that I stopped to reflect on how calm I was during this time, and how my totally calm matter-of-fact manner actually helped her engage with the tapping process at the time and facilitated her calming down also. I have mentioned previously how important I believe it is for parents to tap on themselves for their children’s problems and how they are affected by this. Now once again I have been convinced of the power of this. Having previously done a lot of tapping on my daughter’s upsets I now felt calm and able to deal with the situation.

Once again, I did the tapping with my daughter, but this time I persisted until it was clear that she was truly over the experience. I rubbed on her sore spot for her and repeated the words, this time focusing on her feelings “Even though you’re scared Daddy loves you and you’re still a good girl”, and when tapping alternated from the feelings to the images that I knew were disturbing her (“Scared”, “House falling down”). The whole process took maybe 5 or 6 minutes, after which she settled down and went off to sleep. Had we treated all the aspects? I’m not sure, but it sure is reassuring to know that we have a tool ready at hand to treat these problems should they come to light again.

Two days after my daughter’s late-night panic I have been reflecting on how grateful I am to have a technique such as EFT to assist both my family and myself to deal with problems such as this, particularly in these difficult times. I am reflecting on the fact that I was able to fly across the country two days after the World Trade Centre disaster and was able to totally eliminate the anxiety that came up prior to the trip, only remembering about it afterwards as I reached my destination. And the fact that whilst away my airline company went bust and I was stuck in a city over 3000km from home with the prospects of being there for some time – and it truly didn’t upset me! And the fact that while I see anxiety all around me right now and have plenty of reasons to be worried I am still able to function with relative calm and make some quite difficult business and financial decisions.

I truly believe that there is more need than ever right now for tapping and other energy therapy techniques to be shared as widely as possible with the world. I believe we are experiencing a global anxiety unprecedented in this generation and the need for techniques such as these has never been stronger. I believe that for most of us the place to start is in our own homes, with our own family and friends, and with ourselves.

Whenever there is a major terrorist event such as the September 2001 attackes, whether or not you think you were personally traumatised by that event, I encourage you do some tapping yourself and encourage others in your family to apply tapping to treat any reactions. While you are there, treat yourself for anxiety about the future and what “Might happen” – as well as some of the bad things that inevitably will happen. Then you will be able to move forward without fear and continue to live your life.