Howard Stanley, Artistic Director for a stage company, discusses how he used tapping (EFT) for reducing fear/anxiety for his performers after attending a workshop by Dr. David Lake and Steve Wells. This article was originally published in EFT Creator Gary Craig’s newsletter. The continual tapping which Howard credits as a crucial part of the success of his program has since become one of the key components of our simplified tapping approach, Simple Energy Techniques (SET). 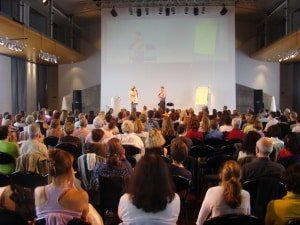 After attending the Sydney EFT and Power of Self-Acceptance workshop presented by Dr. David Lake and Steve Wells earlier this year and road testing EFT and continuous tapping I decided to apply it to rehearsals for a play, EQUUS by Peter Shafer, I was directing here in Bermagui, a small coastal community on the Far South Coast, New South Wales (Australia). As a theatre director whose job is to somehow get the energies of actors as well as numerous other specialists (sound, costume, lighting, etc) flying in formation, it has always been my dream to collaborate with a group of people who are able to just do the job, where the only drama is what the audience pays for.  To this end I had employed various strategies over the years with reasonably good results until I became aware of EFT.

While it is difficult to quantify an experience, I and the performers, designers and audience can say confidently that this production was one of the most satisfying ‘fear free’ shows I, and they have ever done.  Most of the cast had never done a show before.  They had no idea of what it entailed, for the others who did have some experience none had ever been in such a radically challenging production.  There are many personal as well as artistic challenges which come up with a show like this, in addition to the day to day anxieties (called life) that unfortunately creep into a creative environment, which is normal for a show, any show.  It goes way beyond just a fear of public speaking and a fear of forgetting lines which are the front rank, the most obvious.

EQUUS is very much a play about walking the talk.  A psychiatrist consents to treat a 17 year old boy who has blinded 6 horses.  It is meeting between Dionysis and Appollo, between reason and instinct.  The psychiatrist meets his shadow.  The shadow wins.  The play while 30 years old is universal and still pungently confronting.  Can we who are doing it walk our own individual and collective talk also?

To this end I asked that everyone whilst in rehearsal tap their fingers continuously whether they were in a scene or not.  I also said that it was just an experiment and we didn’t have to believe it would work.  It could also be considered useful; I went on, as a kind of meditation and thereby keep people present. More than half the cast were experienced meditators.  Everyone consented.

We began rehearsals by putting our attention on the worst thing that could happen and the best thing that could happen. Then we tapped.  In my case every day for six hours over four weeks.  The result?  People continuously said yes.  Yes to pretty much everything that was our process.  Most remarked that they had never had so much fun, or felt so supported, that they had never felt so confident with remembering their part (moves & words).  They were less fearful of the ‘audience’.  A couple of actors cleared traumas associated with childhood abuse issues, triggered by their character and their character’s interactions with other characters and/or the staging which incorporated stylized movement, all characters being present onstage for the entire show and, nudity.  We all felt so much better generally around issues of self worth.

During the run, we all were actually excited about future performances.  There were no suicide attempts in the dressing room or car park after the show; in other words, people’s internal critics were relatively quiet.  Performances from the opening night continued to grow and develop.  No two steps forward one back.   After the season ended all the cast agreed in a debrief that the experience was powerful, healing and positive.  No one, including myself seemed to be affected by the common energetic comedown, a kind of post -natal depression which surprised many in the community who seemed to be expecting us to feel like that.  Amazingly, one performer regained her faith in directors!  Then there was the audience….

Arguably the best kind of feedback a performer can get from an audience is the quality of silence that occurs at the end of a performance.  I won’t attempt to describe this as I’m sure the reader has (hopefully) had this experience.  (If not come see our return season in December)  It is profound.  We were really lucky – we had an interval, so we got two, every night.  Our review simply confirmed this.  This wasn’t Bermagui – this was New York! – the reviewer was heard to mutter after the opening night.  The play became an event.  People were turned away.  Cast members who’d never performed were hugged publicly; everyone in the cast was greeted with smiles and compliments as they went about their normal day to day activities. Admiration, hope, friendliness, laughter and occasionally, awe greeted us for a time.  The community got the show it deserved and boy! were they happy!  These kinds of events are extremely important for a small, interdependent community.  They remind us of possibility, of hope.

I have no hesitation in recommending that anyone who is involved in any kind of group activity, in any context, to tap continuously.  To say it is liberating is an understatement.  I would encourage people to just ‘do the action’ with not much else. That is, tap without much expectation and wait for the surprises to occur!

Thank You Steve and David for providing tools for possibility and hope in my colleague’s and my own lives and practice.