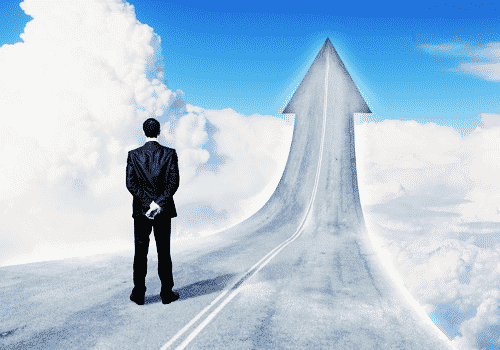 I worked with a business owner whose wife and business partner was about to have a baby (their first). Since she had previously driven much of the business visioning, he felt pressure in taking on this role. He also had concerns about handling parenthood, managing the transition, and ensuring financial security for his family.

I began by working with him on the issues and fears that were paramount in the immediate term, primarily the pressure of feeling that the success or failure of the business was now pretty much in his court. I taught him EFT and we applied it to “this pressure”; “money worries”; “fear of coming changes” and several general issues that provoked anxiety for him. On each, he experienced some relief.

I then asked about his ultimate goals – both for his business and life. I had him go away and discuss with his partner what these were and I also recommended he read Napoleon Hill’s book Think and Grow Rich. This book holds a tried and tested formula for personal success, which, when combined with EFT, represents IMHO an unbeatable combination. I knew that having read this, along with the daily tapping I had recommended, he would return with a new level of enthusiasm towards the future. He did and we went straight to work on setting a new vision for his business.

I should point out that in the area of goal setting and strategic business planning I think EFT has great potential. When we set goals, we are often confronted by limiting beliefs and negative feelings. I believe we need to be expansive in the initial stages, thinking without limits. I am most interested in getting to the big goals that people have been harbouring inside but holding back on. I want them to get into that free-flowing state where they can explore new realms and generate new possibilities. When most of us try to do this our current reality comes up to grab us. We then tend to only see the future through the present, and even if we do see advancement we tend to do so in an additive fashion rather than seeing our true potential for exponential growth. So during the early stages of goal setting is the perfect time to tap.

As with this gentleman, I usually warm up by asking people to identify any negative beliefs and other barriers they have to having, doing and being whatever they desire. And then we tap on them. We take whatever time is necessary to treat these, particularly identity beliefs. In this business owner’s case, there were beliefs about not being smart enough, and not being strong enough. I asked him to make each statement and see how true it felt to him (eg. “I’m not smart enough”), and then we tapped on it, with him repeating the negative belief as we tapped each point (eg. “Even though I’m not strong enough”, “Even though I’m weak”). After a round or two of tapping, I had him make the statement again to see how true it felt. As is typical, after a few rounds of tapping his negative beliefs now felt less true.

I then had him identify a positive polar opposite belief (eg. In this case “I am strong”), and we tapped on this. We then interchangeably tapped on both positive and negative belief statements. As Pat Carrington outlined in a recent post this can be a powerful means of sorting out belief challenges. The reality for most people is that the negative and positive beliefs are both true and not true at the same time IN THEIR BODY. That is, they both FEEL true to some extent. Tapping on both sides eliminates the negative emotions attached to them, usually making the negative belief feel less true and the positive feel more true – or the client can then see how the positive belief either is becoming, or can become, more true. Sometimes the negative belief is accurate (eg. “I am an average golfer”). Tapping does not take this and make it untrue. What it does do is take the negative sting out of it, the bit where we get down on ourselves about it. It also loosens its hold, so that we no longer see it as a permanent reality.

I like Robert Cialdini’s model (described in his book Influence) of beliefs as like tabletops with legs. The legs are provided by our past (reference) experiences. Some of the legs are big and fat and have roots! Knock these out and the tabletop isn’t so stable, the belief is no longer so solid or firmly held. Knock enough of the key legs out and the entire tabletop isn’t supported anymore. They can let it go. We identified some experiences for this gentleman in sports where he had not succeeded as well as he would have liked. Each was treated successfully using Gary’s “run the movie” technique. He was then ready for some heavy duty goal setting – without the blocks.

Once we had cleared the business owner’s belief barriers to moving forward, I then took him through a goal setting process. This began with a free writing “splurge” where I encouraged him to explore all possibilities including ridiculous ones. *Especially* ridiculous ones. I like to encourage my clients to consider goals that are way beyond their present level of development. I want to see if they have a sleeping vision in their heart. They usually do.

I’m primarily interested in big goals because big goals not only inspire us, they also challenge us to confront our deepest doubts and fears and limiting beliefs. The act of setting a big goal brings these right to the surface. And there is great pleasure in removing the blocks using EFT and getting back in touch with your true purpose.

The second stage of goal setting (the way I practice it) is that of setting deadlines for your goals. This increases the heat because as soon as you set a deadline you are making a commitment. Many people are reluctant to set a deadline because then they experience pressure. I love to have people create that pressure then treat it using EFT. This is truly extending your limits, blowing out your comfort zone. It is wonderful to see someone take their goal from the quality of just wishing and hoping to taking the first step towards making it real by saying when they will achieve it by. Until you can say when it is difficult to start planning, and there is always part of you holding back. As soon as you can say when, you have an idea of how much will be required of you at each step along the way. Your goal can be broken down into realistic, achievable stages. This is the stage for realism and planning.

The third stage is to prioritise your goals. Decide which are the most important to you now. As with the business owner, I ask my clients to indicate which are their four most important goals for this year. He set goals for expanding his business, overcoming a particular block in his sport and handling the transition to parenthood.

The next step is to commit to achieving to your goals. I had the business owner cement his commitment by writing each of his main goals down as an “I will…”. There is a huge difference between saying “I’d like” or “I want to” or even “I aim to” versus saying “I will”. Many many people get hung up on this point. All the objections come up. Our doubt in our own abilities comes rushing in. And all of these things can be tapped on.

We did this for the business owner once he had identified his goals. Each of his goals brought up some anxiety about heading into uncharted waters. Once we dealt with these fears using EFT, he started to become excited about the possibilities. His doubt was replaced by a new resolve, a solid feeling of confidence in his abilities. I call this state “100% YES!” Another word for it is congruency. I think it is the ultimate aim of all goal setting, coaching and therapy.

What was the overall outcome of this process? He was able to identify an area of growth for his business and embrace the opportunity if offered without experiencing any further internal blocks to taking action. He became more ready, willing and able to take on the challenge of parenting. He began to enjoy his sport more and achieved greater success, winning some key matches. And his business began to expand.

When I spoke to his wife a couple of months later she remarked at how strongly focused he had now become. This had allowed her to relax and direct her energies towards nurturing their child and they were clearly much happier as a result. I saw them recently. They are happily settled into parenting and happy with the direction their business has taken.

What has been the long-term result in their business? They have expanded and added a new centre to their two existing centres. I was in one of them a couple of weeks ago. It is very busy.